Registration for "Italian Horror Cinema: an International Film Conference" at the University of Bedfordshire closes on Friday 2nd May. Delegate passes (£20) can be purchased through this link: https://spaghetticinema.eventbrite.co.uk​

The event takes place on Friday May 9th and Saturday May 10th, in the Judith Blake Theatre on our Luton campus. As part of the second annual "Spaghetti Cinema" festival, it features a range of international speakers on Italian horror films, including a keynote address from Professor Peter Hutchings (Northumbria). We are also very pleased to welcome our special industry guests: Ruggero Deodato (director of Cannibal Holocaust and Last Cannibal World), Luigi Cozzi (director of Contamination and The Killer Must Kill Again), Catriona MacColl (star of City of the Living Dead and The Beyond), and Me Me Lai (star of Last Cannibal World and Eaten Alive!).

Email ThisBlogThis!Share to TwitterShare to FacebookShare to Pinterest
Labels: Event 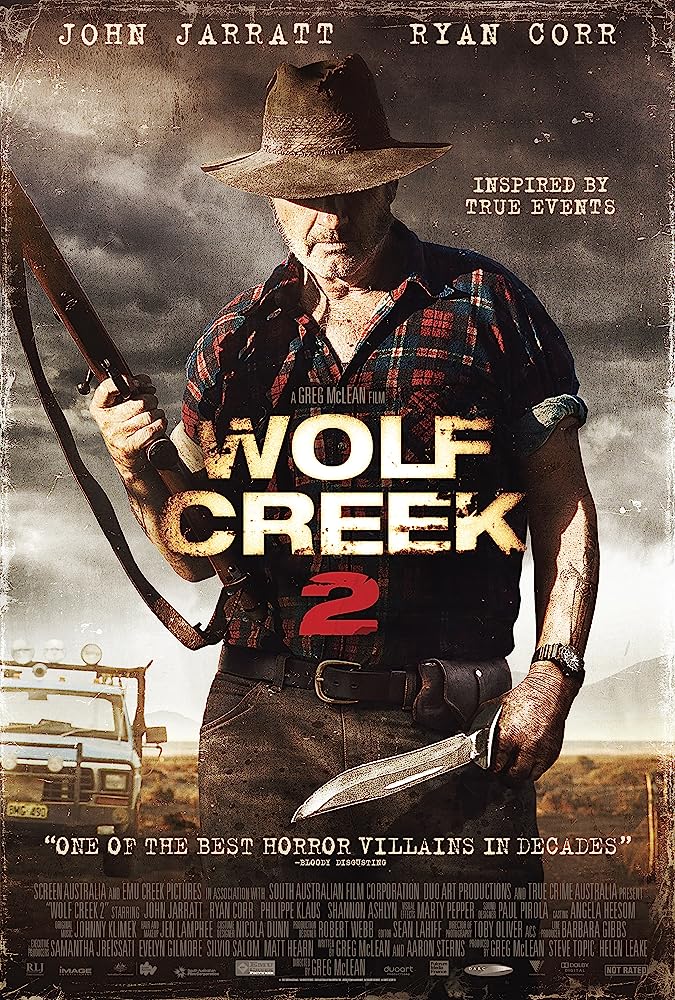 Nearly a decade has passed since the first Wolf Creek was released. Given the amount of time that has elapsed, it is unsurprising that Wolf Creek 2 differs considerably from its predecessor. This is not simply a rehash with alternative characters. The film does follow a similar "trapped in the outback with Mick" plot, but the overall tone is far less sinister. Rather than ratcheting tension, Wolf Creek 2 dives in reasonably swiftly and is built around distinct start-stop set pieces that peak and lull. Subsequently, the 105 minute run-time drags. The inclusion of counter-pointed music and unconvincing CG kangaroos were also unwise choices insofar as they disrupt the horror. Not overtly bloody enough for the gore-fiends, not scary enough for the screamers, not tense enough for the thrill-seekers, not silly enough to be fun, Wolf Creek 2 is a mixed-bag that does not quite come together.
Posted by Dr Steve Jones at 10:15 No comments:

Good Language Use: One Can Never Start too Young

This kid, for example, has a very good grasp of how to illustrate how one would correctly use the word 'encountered': 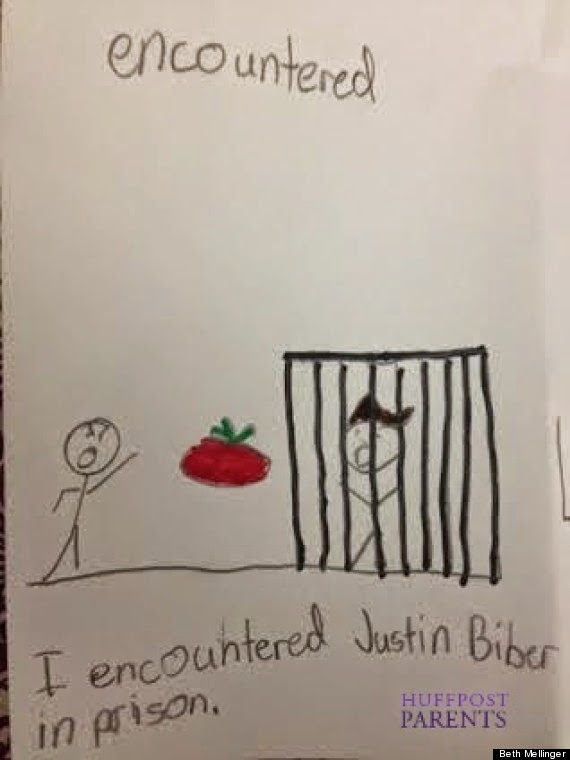 "Right now, Obama is meeting with leaders in Asia to finalize the secretive Trans-Pacific Partnership (TPP) agreement.
The TPP threatens to censor your Internet1, kill jobs, undermine environmental safeguards, and remove your democratic rights.
We're going to get the attention of decision-makers and the media by projecting a Stop The Secrecy message on key buildings in Washington D.C. - but we need you to add your voice now.
The TPP is huge: It covers 40% of the global economy and will overwrite national laws affecting people around the world.
The worst of the TPP threatens everything we care about: democracy, jobs, health, the environment, and the Internet.  That's why decision-makers are meeting in Asia under extreme secrecy and pushing 'Fast Track' laws to cement the plan into place.
This is no way to make decisions in the 21st century. We need to raise a loud global call to expose this dangerous secrecy now."

The petition currently has more than 2850000 signatures

It had a great poster. Now it has a trashy trailer.

This is crazy, but fascinating

Now I'm off to watch The Last Temptation of Christ followed by The Passion of the Christ.
Posted by Dr Steve Jones at 11:00 2 comments:

I Spit on Your Grave 3

Apparently I Spit on Your Grave 3 is being pre-sold at Cannes. I wouldn't go so far as to say I liked the second film (I'm not sure it is an appropriate way of describing the experience), but it was still powerful. I'd certainly on board for another sequel.

Fingers crossed it gets the subtitle "back from the grave"
Posted by Dr Steve Jones at 10:34 No comments:

Let's Not Get Social

This is truly one of the most hideous things I've ever sat through. If ever there was a case for media effects - the premise that media makes people do terrible things - this is it. I'm certainly thinking about using it (in full) at the next open day, or maybe in the opening session I have with the first years. If I can stand there, tapping my feet, maintaining an earnest, stony expression, they won't know what has hit them. Stick around for the four-minute mark: just when you thought it couldn't get worse...

Treasure Island Media have created some contentious porn, much of which is designed to skirt the line between consent and violation. Slammed is one such title, in which the participants ostensibly use hard drugs prior to sex; if the footage is genuine, it is difficult to ascertain the levels of consent involved.
The company seem to revel in controversy, and their latest release Viral Loads is a desperate attempt to shock. The film purports to depict HIV Positive performers ejaculating into a jar. Once 200 "loads" have been amassed, they are then squirted into Blue Bailey's rectum. Unsurprisingly, the film is picking up some negative press, even within porn-friendly sectors. For example, str8upgayporn.com are referring to Viral Loads as a snuff-film (I won't post a link as it is a NSFW site).
I cannot comment on the film itself as I have not seen it. I do not know whether the liquid collected really is semen, or whether it genuinely has been amassed from HIV-Positive performers. It may be that the film is a fantasy construction, or that the audience achieves pleasure from watching this material because, like viewers of faux-snuff fiction, the audience believes the footage to be contrived.
However, it is interesting that even if Viral Loads is fantasy, Treasure island Media continue to create and unabashedly market such controversial material while "extreme" production has all but died out in studio-based heteroporn. I am not suggesting that everything in heteroporn is "peachy" or that gay male porn is "worse" in any way. What the brazen Viral Loads campaign does suggest however, is that campaigners who are concerned about porn and issues of harm should principally focus on performer welfare, regardless of the sexual orientation or gender of the performers involved.
Viral Loads raises many difficult ethical questions, but here is the one that most interests me. If: a) the liquid genuinely is semen, b) that semen really has been produced by HIV-Positive men, c) Blue Bailey has consented to having the liquid squirted into his body, and d) Blue Bailey is able to give his consent (if he "of sound mind" to use legal lingo), does anyone have the right to intervene? To object is to infringe on Bailey's autonomy, suggesting that even if he does make a reasoned decision, his choice is invalid - that is, he is incapable of making decisions about his own body, his welfare and so forth.
The reason I flag this question is that I suspect many people who find the idea of Viral Loads disquieting may not really be thinking about Bailey, or at least not as an individual who made a decision to star in the film. For many objectors, the problem with Viral Loads begins at a broader, more abstract level: with the idea that Treasure Island Media are profiteering from sexual harm, that the film is characteristic of glorified sexual harm that is increasingly visible and pervasive in our culture, or that the notion of viewers taking pleasure in fantasies of sexual harm is indicative of a decline in human compassion, for instance.
If Bailey really is being exposed to high-risk activities, ensuring that he has made an autonomous choice should be our first concern since he is the one who is directly and immediately exposed to potential harm. Yet, each of the above objections point away from Bailey or the particular performance he engaged in. No matter how valid any of these concerns are then, it is notable that our prevailing paradigms for conceptualising the combination "porn and harm" too readily neglect the individuals directly involved in the performance. It seems to me that such approaches themselves display a lack of compassion or concern for human welfare.


Please send abstracts of 500 words to Antonio Lázaro-Reboll (a.lazaro-reboll@kent.ac.uk) and Ian Olney (iolney@ycp.edu) by July 30, 2014.  Final essays will be due January 30, 2015.  Essays should be 6,000-8,000 words in length and should follow MLA guidelines for citation and documentation.
Posted by Dr Steve Jones at 08:47 No comments:

Email ThisBlogThis!Share to TwitterShare to FacebookShare to Pinterest
Labels: CFP

I love an 8-bit game, even if it is pastiche. As part of the promotional campaign for The Raid II (which has received glowing reviews all-round), an 8-bit style game has been created. Apparently it only works on Google Chrome at the moment, but any Chrome users who fancy an "old skool" side-scrolling brawler in the vein of Kung Fu Master can check out the game here.

I'm a little late posting this, but Bill Zebub is becoming increasingly playful with his timings too. For anyone who doesn't know, every year Bill Zebub posts an April Fool's Day prank on his site proclaiming that he is dead. This year he posted the message on March 29th


Detectives confirmed that the body that was found in an abandoned tower is that of iconoclastic director Bill Zebub. He was fond of going into ruins of medieval buildings late at night, pretending to be a mythical creature.  His death was caused by a fal of 66 meters when he fell off the spiral staircase leading to the top of the tower.  His funeral is closed to the public and the location of his grave will remain secret due to concerns of vandalism

I admire his persistence with the joke. It has an air of Stewart Lee style self-reflexive over-repetition about it. This is one King of the B Movies who is setting himself up for an inevitable early April "boy who cried wolf" death one of these days...


Proposed changes to the VRA stand to prohibit independent distribution companies from releasing comprehensive DVD packages by making it mandatory to submit DVD extras. Since the BBFC charge per minute, the result is that many smaller companies will choose to release extras-free packages, rather than facing the additional costs.

As a DVD lover, I encourage everyone to sign the petition linked here:
https://you.38degrees.org.uk/petitions/amend-the-planned-changes-to-the-video-recordings-act

Head over to In Media Res to read Johnny Walker's post on “snuff” and amateur horror: http://mediacommons.futureofthebook.org/imr/2014/04/01/snuff-love-british-nostalgia-and-mythology-real-death-vod-horror
Posted by Dr Steve Jones at 23:55 No comments:

Global Cult Cinema in the Age of Convergence Network Conference

Registration for this event has now been extended to April 8

Please go to the conference website http://cultconference.wordpress.com for further details and the registration form.

Conference events include: A 3D screening of Creature From the Black Lagoon (Jack Arnold, 1954) in association with Abertoir: Wales’ International Horror Festival http://www.abertoir.co.uk

While academic study of cult cinema can be traced back to the 1980s, there has recently been a surge of scholarly interest in – alongside an increasing popular awareness of – the field. In particular, the advent and development of digital networks has led to an increasing awareness of a variety of cult followings and access to unprecedented cult films from around the world. Research addressing the changes wrought by increased digitization and global connectivity has, however, been relatively scant, as have sustained attempts to discuss and debate these issues. The aim of this conference (organised in association with the AHRC Global Cult Cinema in the Age of Convergence Network) is to bring together scholars to engage in a sustained dialogue addressing the role of technologies in different areas of cult film culture.
If you have any queries relating to the conference, please email: cncstaff@aber.ac.uk