Goddammit Guys, What is Wrong with You?

Sometimes I truly despair about the state of internet culture, particularly where some "men" are concerned. I've been pretty quiet of late about the farcical reactions to Anita Sarkeesisan (a woman... who dares to have opinions?!), the "fappening" (women... who dare to have nude bodies AND still feel entitled to privacy...?!), but the Emma Watson incident has tipped me over the edge, not because it is special - sadly it is not - but because it is the indicative straw that has busted my hump. Emma Watson's speech at the UN was perfectly reasonable and not at all inflammatory (or if it was, I missed that part).

She is not the first person to publicly note that gender equality requires men and women to work together, and I'm sure she won't be the last.  Quite why that has inspired some 4Chan users losers to declare that they will retaliate by posting nude photos of her is beyond me. If anyone can explain what aspect of the speech has incited such rage, I'd love to know because at the moment I'm left fearing that the reaction at least verges on psychosis.

Simply put, I can see no reason to disagree with Watson's point: gender equality requires men and women to work together. In retaliation for my having an opinion that sounds suspiciously feminist, I'm now officially threatening to post some nude photos of myself on the internet. Trust me, no one wants that to happen.


**UPDATE**: so, it now looks like the retaliation was a hoax created by Rantic Marketing some attention-seeking losers. Does that make it any better? Barely. Rantic Marketing have Tweeted in their own defence, stating that they are ere trying to force the closure of 4Chan, asking 4Chan users to reflect on their attitudes towards leaking nude photos. Nevertheless, they used a threat of privacy violation and sexual objectification to do so - their leveraging tool was Emma Watson herself. Unless Watson was in on the hoax (which would undermine her UN Speech), Rantic Marketing propagated the kind of threat and disregard for Watson's distress that they are ostensibly railing against. That, my friends, is called hypocrisy, and does nothing to "end the problem". At least I now know who to send my nude selfies to: brace yourselves workers of Rantic... 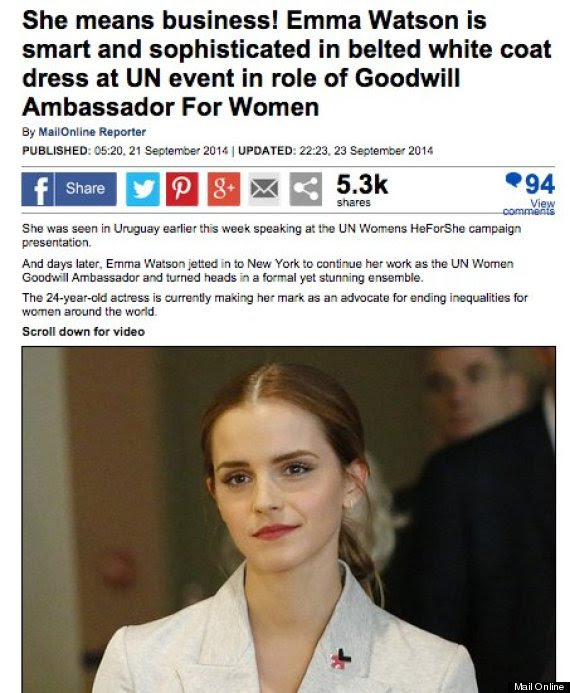 Hear that? It is the sound of my teeth grinding.
Posted by Dr Steve Jones at 09:36