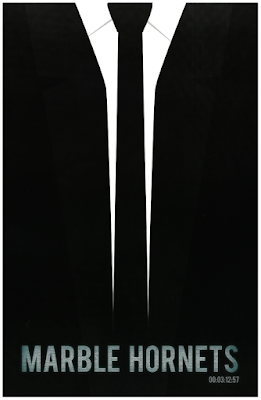 Marble Hornets is a found-footage web series comprised of 87 entries (or 133 videos, all told) that were originally uploaded to two separate YouTube channels between 2009-2014. One, the ‘Marble Hornets’ channel, hosted the main narrative. The second channel ‘ToTheArk’ uploaded sinister responses to the main entries. The series is split into three seasons of varying length, and the whole saga lasts nearly 91/2 hours. The no-budget series gained attention by becoming an early adopter of the Slenderman mythos, and for offering numerous secret messages (such as flash-frames of numbers that were avidly decoded by a Reddit group). Its success was also helped by the first few hours of footage, which are genuinely unsettling. On paper, the series replicates the techniques offered by other found-footage films such as Noroi (2005), for instance. However, the series benefits from the filmmakers’ inexperience; frequently, the early episodes feel “edgy” because they are made by people who do not quite follow standard filmmaking conventions. Consequently, as the tension rises, it feels like pretty much anything could happen next. Unfortunately, that feeling dissipates before the first season closes. The second series has an interesting premise – filling in details of seven months that the protagonist (Jay) cannot remember – but the series loses its unpredictability, becoming entirely formulaic. Virtually every episode in the season consists of the protagonists travelling to a location and spotting Slenderman (here referred to as ‘The Operator’) as the tape becomes corrupted. The second season also shows ‘The Operator’ too much, and so his presence loses impact. The first season makes effective use of Slenderman’s distinctive look by placing him in the background or in the corner of a frame during a pan; he is there, but only for an instant, and that is much more ominous than seeing Slenderman stood around directly in front of the camera. Perhaps the filmmakers also became more comfortable with how to film the series. The material feels “safer” than the early entries, in spite of the more overt threats faced by the protagonists. The filmmakers also rely on dialogue-heavy scenes in the second season. This was an unwise move as the lead performers – creators Joseph DeLage and Troy Wagner – are not up to the task (DeLage’s performance is particularly stilted). The latter problem continues into the third season, and by the seventh hour I was really wishing that they would start tying up the plot rather than stringing it out. It is also a shame that the final episodes were anti-climactic. Still, there are some nice moments buried in the running time for those willing to engage with it, and the makers should be congratulated for what they achieved with virtually nothing. The whole series is still available on YouTube (one user has kindly compiled a playlist of all the episodes in order for lazy folks like me), and the first two hours are certainly worth a look. I would advise digging into the message boards about the series in tandem to watching each entry: the enthusiasm with which new episodes and fragments of information were greeted by fans is more intriguing than the events depicted in the series itself.